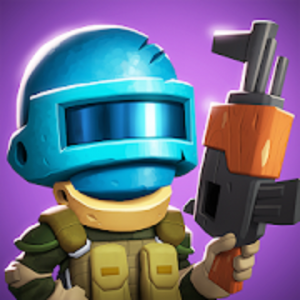 Fight for survival in an epic last man standing multiplayer battle royale – but not as you know it!

— Real-time fast-paced 24-PERSON BATTLES against players from all over the world!
— HUGE game map to explore. Pick your your area of choice and get ready to loot!
— Tons of WEAPONS and ITEMS to loot, including armor and med kits!
— Race to SUPPLY DROPS to discover special rare weapons like miniguns.
— SHRINKING play area. Stay clear of the storm!
— LEVEL UP your battler and unlock new Rare and Legendary characters.

WHAT’S NEW
Good to see you again, Battler! We constantly use your feedback to help us shape the game. Here’s what you’ve been asking for – and what you’ll find in this update:
* Revive – Battle Buddy down? Bring them back to life with revive!
* Female characters – Unlock Rare, Common and Legendary female characters!
* New location – Parachute into the Rocket Site!
* Localisation – Play in 12 languages!
+ bug fixes, optimisation and more tweaks we promise you’ll love.