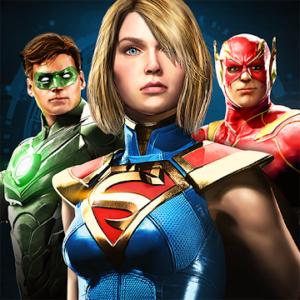 Enter the Universe of Injustice 2 and unleash the powerful fighting style of your favorite DC Super Heroes and Villains.

Expanding on the hit game Injustice: Gods Among Us, Injustice 2 delivers brand new characters, tons of exciting new modes, and the look and fighting style that NetherRealm Studios is known for. Leverage the all-new Gear System to build and progress your roster like never before – then enter the arena and become the ultimate DC fighter in blockbuster 3-on-3 action.

EVERY BATTLE DEFINES YOU
Injustice 2 offers you more ways to build, level up, and progress your roster of iconic DC characters. Upgrade with a Combination Level and Star Rating system by collecting characters and unique gear. The Gear System provides new looks for your character, as well as bonuses to your health, abilities and strength.

EPIC, CINEMATIC STORYLINE
Injustice 2 continues the story set in motion in Injustice: Gods Among Us. Set in the future, Batman and his allies work towards putting the pieces of society back together but struggle against those who would restore Superman’s Regime. In the midst of this chaos, a new threat appears that will put Earth’s very existence at risk.

MOD
Modify the use of energy without increasing or decreasing, so that you can quickly launch your skills, and when you have full energy, you can make unlimited moves!

What’s New:
Considered one of Aquaman’s greatest enemies, Black Manta makes a splash in the Injustice 2 roster as the latest Legendary hero! Fueled by his thirst for revenge, Black Manta gains increasing bonus damage with each consecutive hit. Brainiac is attacking the earth and only the Batman Ninja Team can defend against him in a new Versus Challenge! Plus, play in Champions Arena if you are level 30 and above, and earn high-level gear and hero shards in Raids 7 & 8