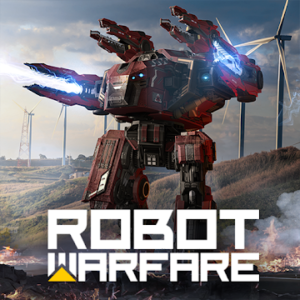 ROBOT WARFARE
A multiplayer online FPS/TPS shooter with dynamic robot wars. Build your coalition of mechs, take part of global tournaments with a ranking scoreboard! Be the best of the best in the team and the deathmatch battles. Prove your fighting skills in real robotic pvp battles in multiplayer robot games mode!

✪ TEAM BATTLE
Two teams fight against each other, team with the most frags at the end of the round wins!

✪ DEATHMATCH
Free for all, several players fight against each other in the battle for the first place!

✪ CAPTURE POINTS
The team that has retained more points wins! Defend with the allies, do not let the enemy capture your point!

✪ BATTLE WITH BOTS
Try to hold out the maximum number of rounds in the fight against battle robots! Training mode!

✪ CUSTOM GAMES
Create a game by your own rules, invite your friends to the lobby and play together!

✪ First persone view
Control your own robot with the first person view from the cockpit.

✪ MULTIPLAYER PVP MODE
The game has several game modes like team play, free for all, capture the points and battle against bots, try to play on all modes!

✪ 16+ ORIGINAL MECHA
A wide variety of different robots, here are a few of them: Spirit, Paladin, Phantom, Titan! All robots in the game have their own features of the speed of movement, height of the jump, weapons recharging and so on. Each robot has its own set of basic and supporting weapons.

✪ MATCHMAKING
All matches in the game are created automatically, all you need to do is click the “TO BATTLE” button, teams and opponents will pick up automatically!

✪ WEAPONS IMPROVE
Improve the capabilities of your mechs, improve damage, range, recharge for a better and faster victory against your opponent!

✪ DRONE-ENGINEER
Allows you to extract the item from the enemy robot with 70% chance.

Survive in the conditions of war, come up with tactics of the battle, help your teammates.

Our game is completely FREE to download, but some elements in the game can be purchased for real money!