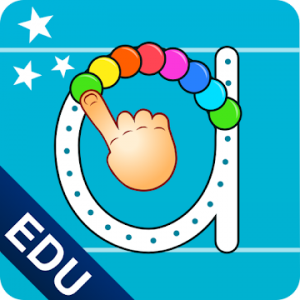 Writing Wizard is the perfect app to help every child learn how to trace their ABC’s, 123’s and custom words (such as their names) through a fun system carefully designed to maintain motivation.

• Show and enforce how to trace letters, numbers and words correctly
• Fun tracing using 25+ animated stickers, sound effects and interactive games that animate letters at the end of tracing
• Uppercase & lowercase letters, numbers and words
• Ability to create your own word lists (and record audio for each word)
• 3 Fonts available (ZB, DN & HWT)
• Fully customizable to suit every child’s needs (letter size, difficulty,…)
• Check progress thanks to reports that display what the child has traced
• Shapes tracing activity for toddlers

• “Writing Wizard is the most complete and intelligent letter tracing app we’ve seen”” AppoLearning.com
• “This brand-new app should be the go-to for every parent, teacher and therapist to work on handwriting” – TOP PICKS – 5 stars – SmartAppsForKids.com
• “Writing Wizard by L’Escapadou is everything a parent wants in a handwriting app, and more.” 5/5 – kids-app-reviews.com
• “L’Escapadou has made handwriting fun.” AppyMall.com 5/5
• Listed in “20 best educational iPhone and iPad apps for kids of 2013” – appsplayground.com
• Editor’s Choice Award for Excellence in Design – Children’s Technology Review

Kids want to have fun, and Writing Wizard offers a lot of fun to keep them motivated in learning writing!

• Kids learn trace letters, numbers and shapes using 26 animated stickers and sound effects
• Once tracing is complete, kids can interact with them on 4 games that animate letters
• Children can trace any word and record their own voice for each word (write their name and hear it when tracing)
• Preschool kids learn the whole alphabet with letter sound and letter name: they learn the appearance and pronunciation of each letter, they trace the letter and hear the sound at the same time
• Kids can collect stars in 5-Stars play mode and have fun succeeding modes increasingly difficult
• Early learners have five practice options: capital letters, lower-case letters, numbers, shapes or practicing full words

• Ability to create your own word lists (and record audio for each word)
• Detailed reports provide information on what kids have done, including the ability to replay and export the tracings to view kids’ progress
• Multiple parameters to customize the app according to child’s current education level (letter size, difficulty, show/hide model, allow to stop between key points, etc.)
• 3 popular fonts: Zaner-Bloser (ZB), D’Nealian (DN), and HWT
• Letter names and letter sounds (which can be customized
• A customizable 5-Stars play mode to maintain motivation and fun
• Create an unlimited number of users

As a Moms with Apps member, we follow the “Know what’s inside” best practices for kids’ apps.
L’Escapadou takes children’s privacy seriously. We believe you should not have to worry about your kids being tracked by apps or websites. This app:
• Does not contains ads (except for our own apps which are listed in a child protected section)
• Does not collect any user information
• Does not contain in-app purchases
• Protected External Links (an addition must be solved).

Known issues:
If you have some issues with the app, please try:
– go to Device Settings > « app name » > Clear Cache and Clear Data
– on some Samsung devices (S6, Note5, ..) on Android 5, try to update to Android 6 if possible (go to Settings > About device > Software update)
– if you still have an issue, please contact support@lescapadou.com, giving your device name and your Android version

What’s New:
• Create worksheets from your word lists when it’s time to practice on real paper!
• Export and import word lists
• Create Word Lists from text files
• New font (Swiss-German)
• New animation to show the tracing that the child must do
• Optimization for Chromebooks
• Choose between the sound of the letter, or the name of the letter, or both
• Option to automatically repeat the drawing of the model
• Go to next letter automatically after the time limit